Last year was an exceptional one for the NAI. While the most important task remained of course the administration of NAI arbitrations, last year also saw the appointment of a new NAI Executive Board.

The founding of the Court of Arbitration for Art, which is linked to the NAI, was also completed in 2018. Furthermore, the NAI’s Advisory Board acquired a new chair (mr. D. Knottenbelt, succeeding Professor mr. H.J. Snijders), and a large number of new members were appointed to the Advisory Board, including company lawyers. It was also announced that the current director (Ms mr. F. von Hombracht-Brinkman) will be retiring in 2019 and will be succeeded by a new director.

Naturally, when handling arbitrations in 2019 we will continue to do our utmost to meet the wishes of the parties as effectively as possible. In addition, we will make further preparations for the administration of arbitrations in new areas together with sector institutes. As in 2018, a significant number of arbitration courses will be offered in 2019.

NAI Young Arbitration Practitioners (NAI Jong Oranje) will be launching its programme as early as 15 February 2019, with an international meeting in Amsterdam. A colloquium on fact-finding in arbitration, organised by the NAI and CEPANI, will be taking place in Brussels on 21 March 2019, with speakers including attorneys, arbitrators and parties themselves.

Finally, I would like to mention the NAI’s 70th anniversary, which we would like to celebrate with you in style (on 28 June 2019 in Rotterdam). Together with you, we want to take a look back from a variety of perspectives, but also reflect in particular on the current and future position of the NAI and the "players" involved in the field of arbitration and other forms of alternative dispute resolution. Once special attention has been paid to the aforementioned ‘changes of the guard’ within the ranks of the NAI, the festivities will commence. More information is to follow, but for now: save the date!

On behalf of the NAI Executive Board, director and secretariat, I wish you a great new NAI year,

The Netherlands Arbitration Institute (NAI) and Authentication in Art (AiA) have jointly founded the Court of Arbitration for Art (CAfA). The CAfA was founded to resolve art-related disputes through mediation and arbitration. You can read more about this and other matters in the AiA’s December newsletter.

In this era of “fake news” one may wonder what “the truth” means. Do arbitral awards reveal the truth, and what is it that the parties, their counsel and the arbitrators are aiming for?

A book with the panelists’ written contributions will be published and given on the day of the conference. The price mentioned hereunder includes one copy of the book. 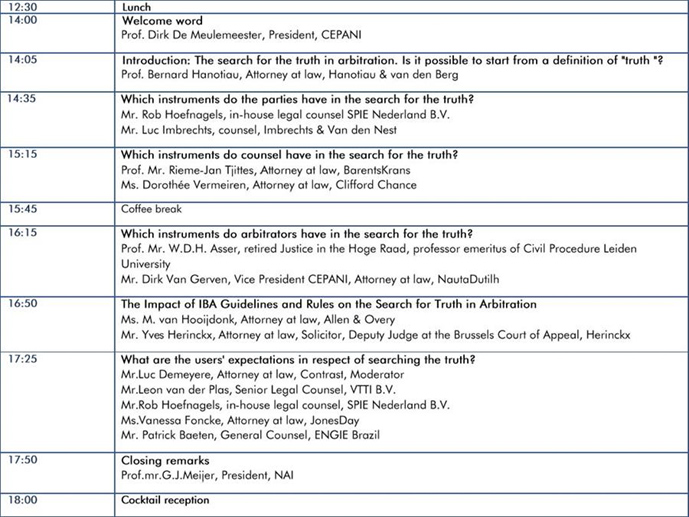 Registration: Please register by sending an email to ago@cepani.be by March 14, 2019 at the latest.

Battle of jurisdictions, seats and arbitral institutions?
Young perspectives on comparing arbitration in the Netherlands, Belgium and Germany

More information regarding the conference will follow asap, for now save the date!

The IMLAM will be taking place in Rotterdam from 30 June to 5 July 2019 inclusive.

The moot scenario concerns the chartering of a ship. The owner claims cleaning costs from the charterer as well as damages for late re-delivery. Murdoch University has its own arbitrators but is also looking for local arbitrators (with Erasmus University, Rotterdam). Candidates can register via this page: http://www.murdoch.edu.au/School-of-Law/International-Maritime-Law-Arbitration-Moot/Registration-for-Arbitrators/

If you would like to help students take their first steps on the path to arbitration, you can do so this summer in the Netherlands!