In conversation with: Juan Fernandez Armesto and Albert Jan van den Berg on:

“The Examination of Fact Witnesses and Expert Witnesses Through Virtual Means”

This first session of a series of live webinars brings personal stories and sharing of best practices of NAI guests. Expect a fireside chat and a dialogue between leading figures on the latest topical issues. The discussion is intended to be insightful and useful to arbitration practitioners around the globe.

Professor van den Berg is Honorary President of the International Council for Commercial Arbitration (ICCA), having served as its President in 2014–2016. He is also Honorary President of the NAI, having served as its President and Secretary-General. He is Professor Emeritus of Law (arbitration chair) at Erasmus University, Rotterdam and is currently a Visiting Professor at Georgetown University Law Center, Washington DC, University of Miami Law School, and Tsinghua University Law School, Beijing and a member of the Faculty of the Geneva University Master of Laws in International Dispute Settlement (MIDS), Geneva.

He has extensively published and lectured on international arbitration and has founded and maintains a website on the New York Convention on the Enforcement of Foreign Arbitral Awards (www.newyorkconvention.org).

Professor van den Berg was awarded “Arbitration Lawyer of the Year Award” by The International Who’s Who of Business Lawyers in 2006, 2011, and 2017, and “Best Prepared and Most Responsive Arbitrator” by the Global Arbitration Review in 2013.

Juan Fernández-Armesto is a professional arbitrator. He has acted as chairman, co-arbitrator and sole arbitrator in more than 180 proceedings, including investment, commercial and construction arbitrations. The commercial and construction arbitrations in which he participated include cases administered by the ICC, plus cases administered by AAA, LCIA, VIAC, DIAC and ad hoc procedures under UNCITRAL Rules.

He is a current Vice President of the International Council for Commercial Arbitration (ICCA) Governing Board. He has been President of the Spanish Securities and Exchange Commission (CNMV) (1996-2000), partner of Uría Menéndez (1983-1996) and Chaired Professor of Commercial Law (1988-2009). In 1978 he started to teach commercial law as Assistant Professor at Comillas University – ICADE in Madrid. He was designated Chaired Professor in 1988 and continued teaching until 2009.

Registration is free of charge.

Login details to join the webinar will be sent to you upon registration. Thank you.

The Women in Law Awards are a global celebration of excellence in the profession across private practice, the public sector, commerce and industry, and the Bar.

“In recognition of your outstanding legal expertise and contribution within the practice area of Commercial Arbitration”;

“The research team has highlighted a number of your achievements over the last 18 months”;

Points awarded included the criteria below:

Thank you to those who have supported this nomination! 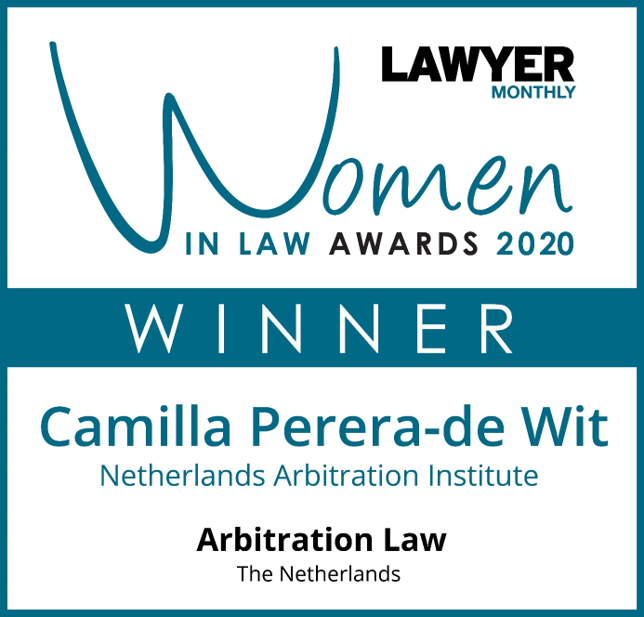 The Netherlands Arbitration Institute (NAI) and Young NAI cordially
invite you to join them on Thursday 18 June 1700-1800 hrs CET for
the following webinar:

‘Commercial Arbitration In Times of COVID-19: The Ability to Adapt’

This event is aimed at sharing best practices and experiences on COVID-19 related consequences in commercial arbitration.

A panel of experts will explore several topics such as:

The panel will discuss these topics from different angles (e.g. private practitioner, arbitrator, institute). The webinar will be in English.

We are very excited to announce the following speakers will participate:

Registration is free of charge. Participants are eligible for 1 PO-point (Dutch Bar Association).


The Netherlands Arbitration Institute is proud to have one of its senior staff members join the ERA Pledge Young Practitioners Subcommittee. Deputy Administrator and Senior Legal Counsel Mirjam Trouw has been invited to join this illustrious group.


Newsflash: The Hague based Court of Arbitration for Art featured in today's edition of the recognized The Art Newspaper.


In the context of COVID-19, the NAI Secretariat follows the guidelines of the WHO, the National Institute for Public Health and the Environment (in Dutch: RIVM) and the national government. The health and safety of our staff and users is most important. In order to guarantee the continuity of our services, the NAI Secretariat works remotely in any event up to and including 1 June 2020. All meetings and/or hearings scheduled to take place at the NAI offices are conducted by means of video link or phone, or are postponed. Please, read this notice which is meant to offer guidance to arbitrators, parties and counsel as to the response to COVID-19 at the NAI Secretariat.


The NAI is hiring two Legal Counsel to each manage one of three case management units at the NAI Secretariat.


As from this fall, the NAI will administrate Court of Arbitration for Art (CAfA) arbitrations and mediations. If you would like to become a CAfA arbitrator or mediator, you can find more information here.


Per 1 januari 2017 is het vernieuwde NAI Mediationreglement  in werking getreden.